Cellulitis is easily identified by doctors looking at your symptoms. Most of the times, doctors don’t need you to do any tests and will prescribe you antibiotics. The symptoms of cellulitis are so conspicuous, like the reddened, warm, swollen and tender skin, that it is readily identified that the disease has taken place and there is no need to do any tests.

Sometimes, however, doctors may require doing ultrasound to confirm that there is no blood clot in a vein lying deep. Just to rule out the possibilities of other problems, sometimes doctors also recommend an MRI or a CT Scan.

Symptoms of Little-spread and Widespread Disease

Cellulitis symptoms are not severe if the disease is restrained to a small area and has not spread in the blood or lymph systems. In such a case, only oral antibiotics do well. If the recovery is slow or the infection is spread wide, you may have to go through intravenous or injections of antibiotics. In such a case, symptoms of cellulitis are fever and chills, together with swollen lymph nodes. Sometimes in fever, you may become mentally unstable and feel confused or sleepy.

Difference of Symptoms in Children and Adults 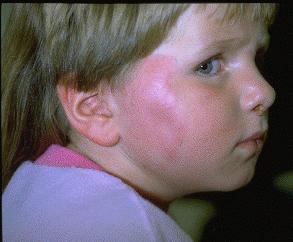 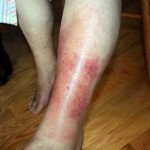 Children get cellulitis usually on face, arms, legs and around anus, with no distinctive borders for redness and swelling. Infants can show more severe symptoms, as their immune system is weak. On the other hand, adults develop cellulitis generally near a site of surgery or wound, like a cut, burn, or dog bite etc. Usually in adults, the disease takes place on legs. However it can take place in other parts too, like ears and face. The symptoms include tenderness and pain.

Symptoms Differing as per the Species of Bacteria

Sometimes it may happen that the antibiotics which the doctor prescribes are not effective on the particular species of bacteria responsible for your cellulitis and so the problem is not cured. In such a case, the doctor has to prescribe a blood test to find out the species of bacteria. Bacteria are tricky in that they become resistant to particular antibiotics and are not killed or stopped. So also, antibiotics act on a particular part of the bacteria. If the species on which they are applied doesn’t have that part, the medicine is ineffective. In such cases, the doctor has to find out first the species and then can decide which antibiotic to prescribe. So, blood tests are necessary. Sample of skin too is required by the doctor for test. Here you should remember that some other tests are of no use, unless there is a possibility of some other disease, such as sepsis, bacterermia (bacteria in blood), etc.

After the primary investigation or laboratory tests the doctor decides the course of treatment which normally aims at relieving pain and other symptoms of cellulitis, reduce the severity of infection, heal the skin, speed up recovery and prevent recurrence.